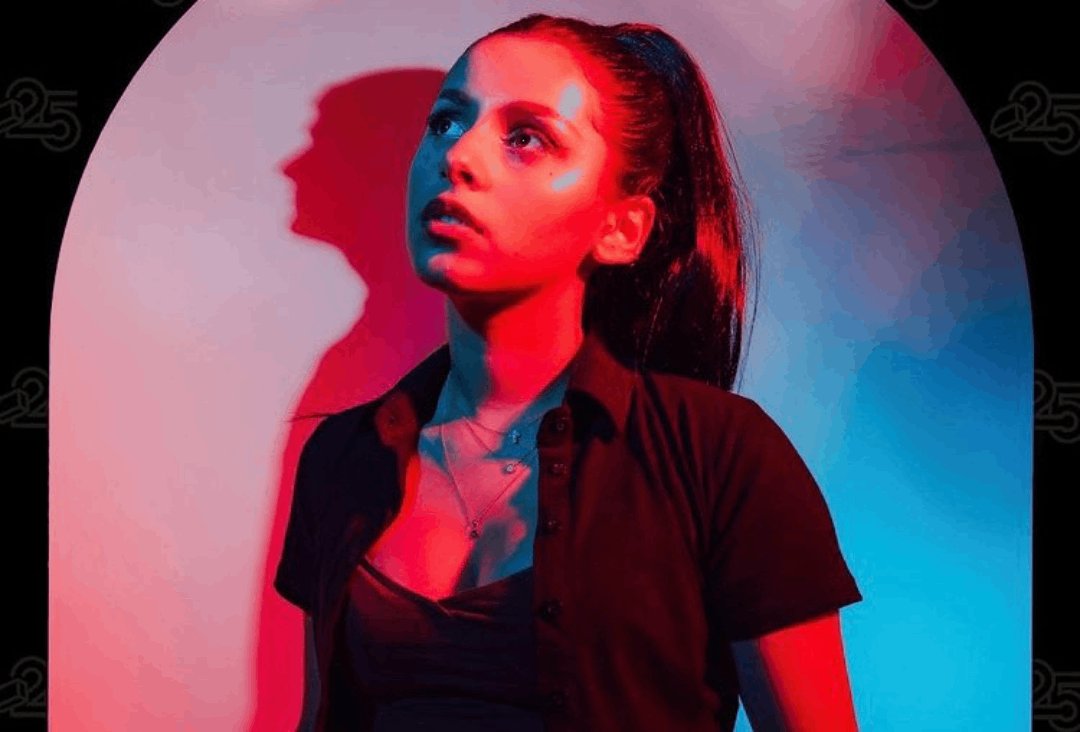 Our boy Anthony Mulholland has a chat with vocal talent Emily Makis.

She is without doubt one of the up-and-coming vocalists within the underground scene, Emily Makis already boasts an accolade of hits that have taken the drum’n’bass and bassline scenes by storm. With a truly dark and authentic sound, we at Goat Shed are excited to see what is to come from the Nottingham-based artist.

Tell me a bit about your musical upbringing, what has shaped the artist we see today?

Emily – It was a real pick and mix When I was growing up my mum was listening to The Smiths and Human league. My Dad was listening to random Greek music. My aunt bought me my first mp3 player and she filled it with artists such as Dr. Dre and Missy Elliot. My uncle bought me my first CD and it was by The Gorrliaz. I just wonder how I ever got into electronic music. Being in Nottingham, bassline was ingrained in the youth culture as I was growing up through sixth form college. I have snapchat videos of myself screaming at holy goof events. I’d never have thought I’d end up being on a bassline track. Listening to artists such as Etherwood and Moleman, I was also listening to electronic music that had emotion — which I couldn’t get enough of. I think the first time I was enveloped into that world was when I attempted to produce using software called Logic. That kind of created a ‘Segway’ into my interest for liquid drum and bass, songwriting, and stuff like that. When I was in my first year of university, I was in a neo-soul collective — so I was listening to a lot of soul music back then. I was also producing some of my own stuff which was more electronic. I felt the most logical route for me was to go into liquid drum and bass because I felt my voice lent itself to it and I liked writing quite therapeutic lyrics. It just so happened that Monrroe was within my circle, so it really was a natural progression from there.

How did you get into songwriting?

Emily – Ever since I was a teenager, I was writing little bits. Singing and songwriting went hand in hand for me. In my last year of sixth form I was writing loads more. I’d be in front of my piano writing songs. For me, songwriting is my favourite element of the music industry. I would happily just write songs, even if they were just for other artists.

Was entering the underground scene always an ambition of yours?

Emily – As well as wanting to produce, my main aim has always been to write music that resonated with my target audience. I do try and take a bit of a different approach, like making my lyrics a little more intricate. I love the challenge of thinking about concepts and taking it on from a different angle. My drum and bass material was gaining traction, I thought that if this was the way I could reach people, and get myself out there, then why not? I also didn’t think my vocals would lend itself to bassline when I first started. It was all a slow burner at the beginning as I was focusing on my university studies. Then the classic case of post-university worries kicked in. I spent my time stressing about how I was going to apply my musical studies onto my career. Whilst at University, I did quite a lot of production and song writing. In terms of how that related to drum and bass, a lot of the tracks I’ve written then have now been developed into actual drum and bass pieces. I’ve always been drawn to the darker side of music, so drum and bass was a great genre for me because I think my voice lends itself nicely to its sound. I would, however, love to do more commercial material, songwriting within the commercial world is very interesting and challenging. For instance, a concept like ‘Afterglow’, by Wilkinson, which has drawn so much success, is a type of song that I would love to emulate one day.

Emily – I’ve learnt a lot from producers. Their work ethic is crazy. They must have a vitamin-D deficiency because they hardly go out. I’ve definitely taken a lot from understanding the amount of effort that goes into a song. It helps me realise that I have to apply that same effort to the vocal side of the track. Working with artists like Freaks and Geeks, K Motionz, and Monrroe has been great. With vocals being the last step, when I get hit up by a producer I make sure that I don’t spend too long on it. I do also come across producers who have a remit and give me ideas for the type of lyrics they want for their track, each process varies. Because of Covid, I didn’t meet a lot of the artists I was collaborating with. Lockdown meant I had to communicate with them online. I’m looking to put more of my own music out in the near future, such as an EP involving collaborations from other producers which I’m very much looking forward to.

How does it feel releasing such well-received songs within the drum and bass scene? Namely ‘Never too Old’, ‘Stand Up’ and ‘High Note’.

Emily – It’s kind of shocking in a way, because I never really expected it. I never wrote the tracks with the intention of them gaining traction. But now they have, It’s helped me figure out the algorithm of making a successful track a little more. Knowing what people like is something that has become more clear. Now I understand what people are looking for in my tracks, it has given me a thirst to expand on that and gain even more streams. The growth I’m seeing from these tracks has really given me the energy to carry on and try to become better. Once I’ve written a song, my mindset is pretty much on to the next one. I do go back to some of these older tunes for reference — just so I know what type of stuff I’ve covered before. Also, to remind myself as to what things went well in these tracks.

How did it feel being nominated for ‘Best Vocalist’ and ‘Best Track’ in the Drum and Bass Arena Awards?

Emily – It feels good. Especially following on from being up for best vocalist last year as well. It feels great getting that recognition over a period of time. Koven won it last year and she is without doubt one of my favourite vocalists. Being alongside artists I’ve been listening to for years, such as Charlotte (Haining), is crazy to me. There’s so many vocalists out there that deserve to be in that line up. I think it’s important not to give it too much weight though, as there are so many talented vocalists around at the moment. I’ve got to say, although I wrote the lyrics and did the vocals, it’s Kallum (K Motionz) that carried the success of ‘High Note’. He is a production force. He is going to do massive things, he’s a little dnb star. It’s because he’s very committed to the genre and the scene.

How did the lockdown affect your music career and aspirations?

Emily – It’s funny, I moved into my flat and found the lockdown period really helpful for my music career. I was able to focus on my writing, music, and features. I didn’t have to worry about immediately getting a job after just graduating in 2019. The downside to this was that I had a lot of down time on my own. It was quite taxing mentally, but I wouldn’t change it because it led to a lot of output. I try to compare my workflow now to that period because it was so intense. The whole period was definitely a blessing, but it did come at a mental cost. I got some funding that also supported me throughout the lockdown. I was really lucky, because that opportunity gave me the freedom to be creative and pursue my music endeavours. Lockdown also just gave me more perspective as a whole. Life does get in the way, so I was able to experiment with new things musically.

Where has equality and diversity reached within drum and bass at this moment in time?

Emily – I guess the women I have spoken to, there feels a difference in attitude as a whole. There are programmes and forums that acknowledge lack of opportunities within the scene, which is great. It gives women a platform to discuss and have their own space. However, although it looks great in the public eye, I think there needs to be improvement within a more private capacity. Essentially the day-to-day of the scene. The female disparity comes way before production. We are talking about a genre that does attract more men, so maybe the social foundations of the genre is a result of that. This is also a societal problem, not just within drum and bass.

What can we expect from you in the future?

Emily – Next year I want to try and break some boundaries. Writing stuff that resonates, but keeping my dark and melancholic twist. As I said earlier, there will be an EP out soon with a label I’m not mentioning yet. I want this to be more conceptual than your average EP. I’ve been writing quite a lot, so I’m sitting on a lot of stuff right now. Events wise I do have some stuff planned. Hopefully some events outside of Nottingham, so I can create more of a name for myself outside my city. My endgame dream is to become a songwriter. This doesn’t necessarily mean dropping becoming an artist, but in terms of where I see myself further down the line I’d really like to have a sustainable career within music.

Women in Drum and Bass // Feature