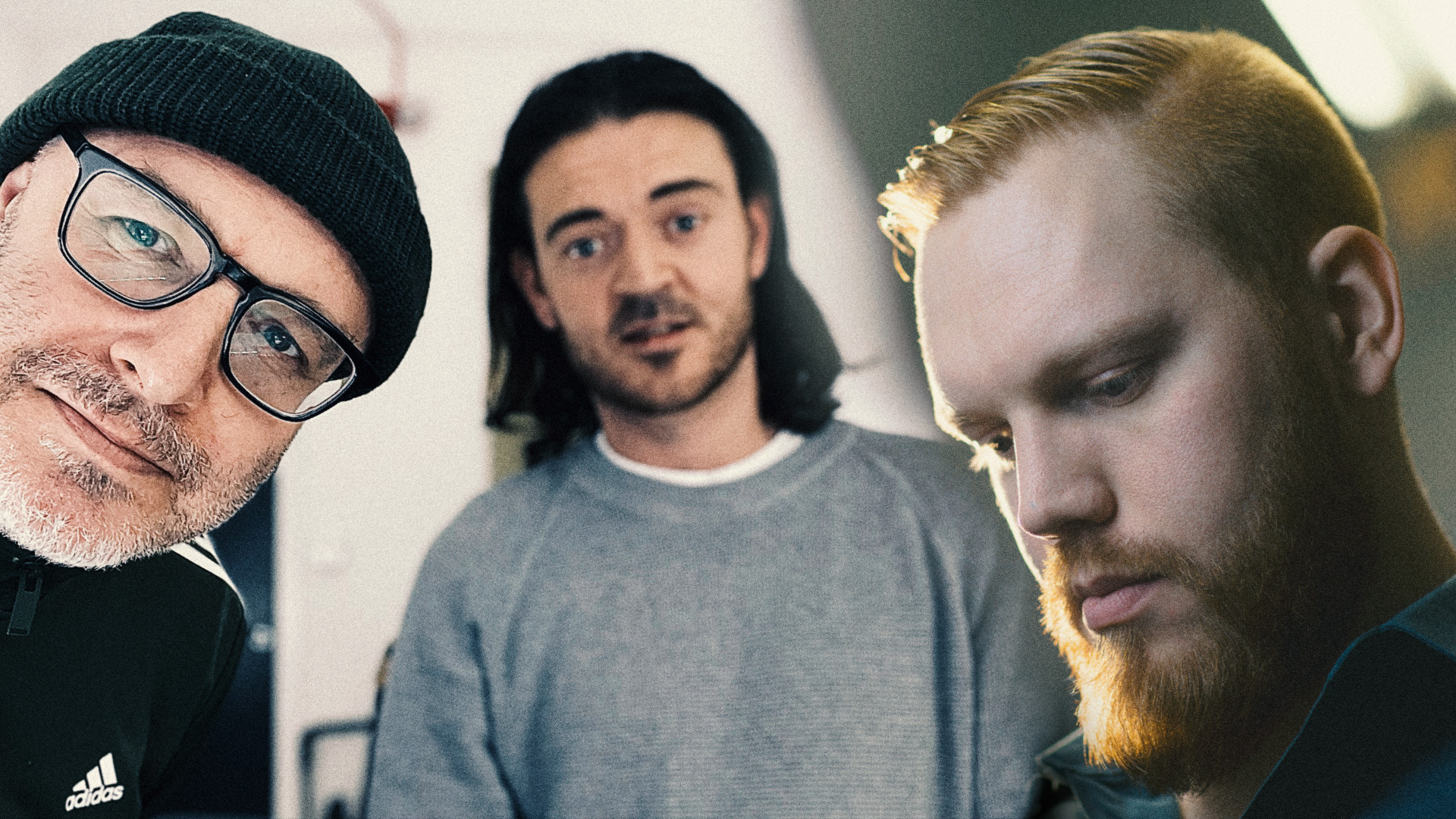 Hot off the heels of their smashing EP together, we caught up with Battery & Philth.

They’re two well regarded names in drum & bass who collided in spectacular fashion recently with their “Majesty EP” on Dispatch Recordings. Combining their wealth of experience together, Battery and Philth built each track physically in the studio together with a focus on using analogue equipment.

The end result was four unique but equally banging tracks. Each cut has its own path of influence and style. Each producer brings their musical influence and technical abilities to the fray culminating into a seriously heavyweight EP. This is a collaborative effort we hope to see together again in the future.

Following its release, we decided to have a chat with both Battery and Philth. They talk writing the EP, the benefits of analogue equipment and much more. Get stuck in!

Hey guys! What’s got you both motivated right now?

Philth: I’m playing my first gig in 6 months this week. Prepping my music reminded me how much unreleased music I have in the bag and got me excited for these upcoming projects.

Battery: We’re in a good creative flow at the moment writing and finishing tracks regularly. The past year we did a lot of writing but not so much of the finishing! This year we’ve imposed a new rule of stopping to finish and mix once we have four good track ideas as opposed to 16!

With restrictions lifted soon (hopefully!) how are things looking for you?

Battery: We’re just excited to see the world returning to some sort of normality. Appreciating simple freedoms we probably all took a bit for granted before.

Philth: I’m booked to play one of my favourite clubs in July, Wire in Leeds. The system in there is incredible and I can’t wait to let off all these dubs and feel the bass hit my chest. Dispatch at Fire is another big one in July….

You’ve released the “Majesty EP” together on Dispatch. You chose to work actually in person, why was that important to you?

Battery: Particularly when you’re working with people for the first time it’s important to capture that shared energy and excitement in the same space. Ideas flow faster and are executed more naturally. The whole experience is a lot more fun and that comes through in the music.

Philth: I love doing stems swaps, but they feel more deliberate. You often explore lots of ideas in your own time before sending it back to the collaborator. Being in the room together you have magical moments when suddenly an idea catches and you all feel the vibes in the air. This leads you to chase that vibe and create something pure and honest.

There was also a focus on using analogue hardware first, what difference has this made on the overall sound?

Philth: Weight and power in the drums. We hit the gear really hard and it gives the drums a crunch and texture that you can’t recreate with plug-ins. So much of modern DnB is ultra-clean and we’ve deliberately pushed in the other direction by using hardware on these mixes.

What can the analogue hardware achieve which other forms of production doesn’t?

Philth: As well as the sound itself, there’s also the fact that once you’ve run audio through the hardware you’re committing to the sounds. This forces you to be bold and decisive, instead of endlessly tweaking a plug-in you can move on to the next stage of the tune and workflow is improved greatly.

Philth: I recently bought a Big Sky and I’m totally in love with it. In theory it’s a reverb unit, but there are so many options with shape and texture. I’m using it almost like a synth, running audio through it and resampling the reverb tails to create new sounds.

Battery: It’s the processing end of things where good hardware is still hard to beat. Currently we couldn’t live without the Zehal EQ1 and Shadow Hills Dual Vandergraph compressor in our lunchbox for crunching drums and most recently purchased Neve 5059 Satellite for warming up stems in the mix.

The EP itself features four very unique tracks, different vibes and feelings. Is that something you set out to do?

Philth: That’s just a natural result of being together for all the sessions, and having a broad palette of influences and styles we love to make. We didn’t go into any session with an agenda, we all brought tons of samples every time and let the samples and vibes on the day direct the style of each tune.

Battery: We always try to represent a range of influences on an EP. As well as keeping it interesting for ourselves it makes it more listenable as a body of work and allows tracks to be played at a range of different points in DJ sets.

If you both had to select one of the tracks from the EP that standouts for you what would that be? What makes it stand out for you?

Battery: All of the tracks were really enjoyable to write and came together very naturally. The four tracks we wrote together were the four tracks that make up the EP. We didn’t choose the best from a bunch so it’s going to have to be really boring and say they are all standout tracks for us!

Philth: “Ambra” for me, I love each tune on the EP but I have been playing Ambra literally every set ever since we made it, it creates a warm uplifting mood on the dancefloor so it’s perfect for giving the crowd a lift when I’ve been hammering darker tunes.

What brought you together to work on an EP?

Battery: Craig and Phil met at an end of year showcase of South London Music schools for their prospective students and stayed in touch from there. A WhatsApp group was created with a view to working together where we began sharing music we all liked and a lot of bad jokes. In our experience when you can connect in those two areas the seeds are pretty much sown for a successful collaboration!

Philth: We all work in education alongside our music careers, and we have also shared ideas for student projects and our courses. It was one of these evenings in the pub when Craggz popped the question and invited me for a studio day!

Has the pandemic affected the way you work or your relationship with music?

Philth: For me personally it has been a difficult time without the feedback you get from playing music to crowds. It made me realise I make a lot of music based on what I think the reaction will be, and I’ve found it harder to write dance floor tunes without the inspiration from the clubs. So I’ve focused on making my studio sessions enjoyable for myself, writing music for fun rather than making it so work-driven. I’ve been working on a hip-hop project along with loads of deep liquid vibes and having a great time in my studio again.

Battery: I think we’re both just very thankful for having a love of making music. It always helps to get you through tough times and allows you to focus and channel your energies in a positive direction however you may be feeling.

Is there anything from pre-pandemic days that you don’t miss?

Philth: Fighting onto a packed Tube to get to work in the mornings! But I left my college job and left London so now my commute is just down the hallway.

Battery: Not being able to get takeaway drinks from a bar was a terrible thing!

What do you do to relax?

Philth: I like to cook, especially curries. And I watch a lot of movies, films and their music are a constant source of inspiration for me.

Battery: Watch movies, read, spend time with friends and family, eat, drink and be merry! Spend time in the great outdoors and avoid rooms without windows!

Philth: I’m music-obsessed and can’t imagine another field of work that would satisfy me in the same way. But when I was growing up I wanted to be in the NBA. So if they offered me a spot playing for the Lakers I’d take it.

What’s a little known fact about you?

Philth: For years I’ve been playing funk/soul/disco and house/garage sets for my mates at house parties and birthdays. This year I’m launching a side-project exploring these tempos under the name Starphunk.

Battery: Craggz was in a well respected Death Metal Band called Mutant when he was 16. Doug’s uncle Hamish was in The Average White Band.