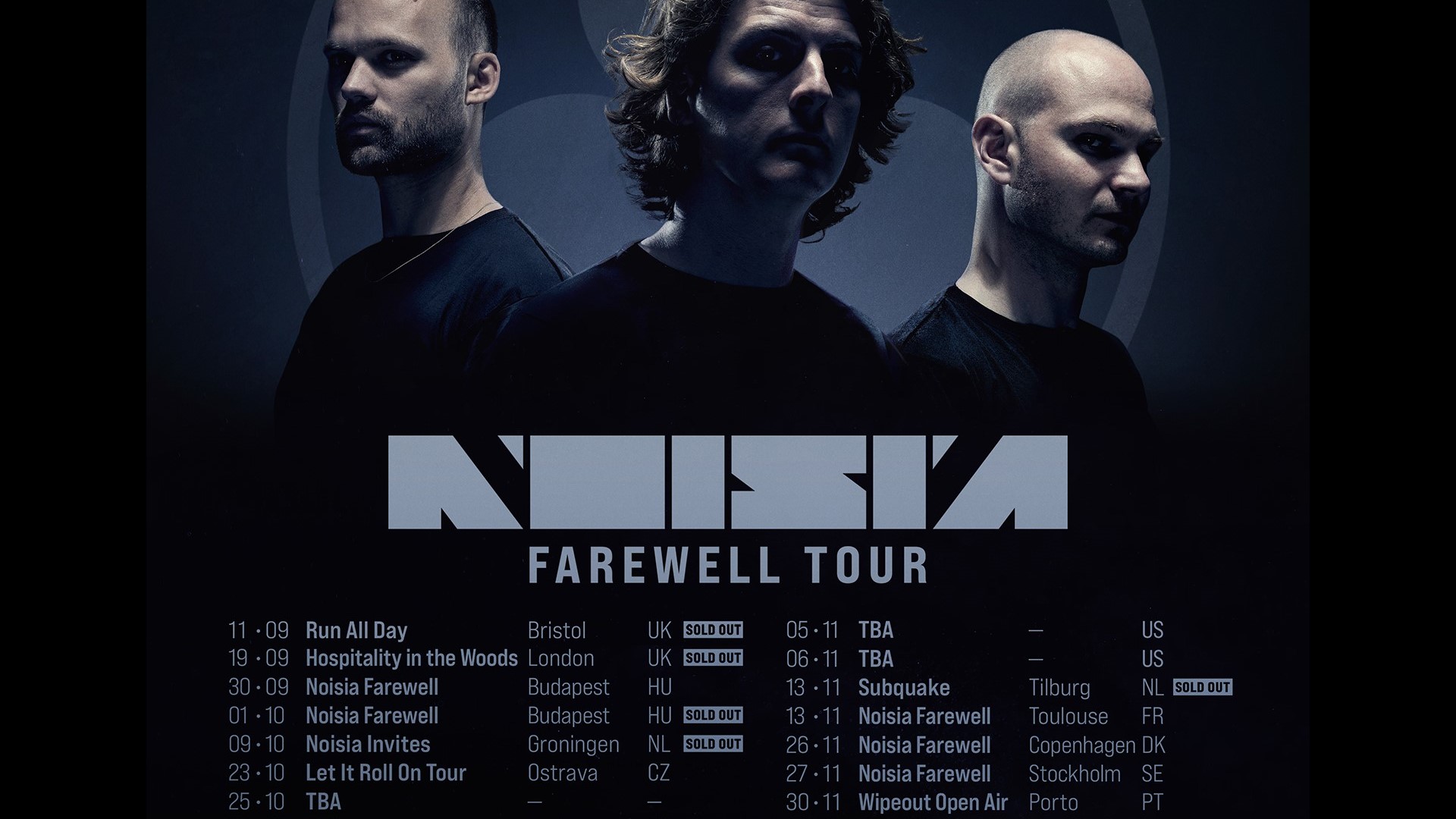 Dutch electronic music legends, Noisia, have revealed their final ‘Farewell Tour’. The trio announced in September 2019 that they’d be splitting at the end of 2020, but following the covid-19 pandemic, they decided to postpone the ‘end of Noisia’ until the close of 2021 to allow them to say goodbye to as many of their Dutch and international fans as possible.

Running from September 2021 to December 2021, the ‘Farewell Tour’ will see the group hit the UK, US, Hungary, Czechoslovakia, France, Denmark, Sweden, Portugal, Belgium, and many more, alongside 3 shows in their native Netherlands. The tour includes headline sets at Let It Roll Tour, Rampage, Hospitality In The Woods, Wipeout Open Air, and beyond. Many of the events have sold out, however, further shows will be announced soon.

In late April, Noisia joined Icicle, Posij, Former, and The Outsiders for the VISION Kingsnight stream via twitch.tv/visionrecordings; replaced the previously advertised Noisia Invites Groningen live event, which has been rescheduled for October 9th 2021. Noisia’s previous livestreams were in May 2020 for Beatport Live and in July 2020 for Glastonbury’s Shangri-La for Lost Horizon.

In September 2019, Noisia aka Nik Roos, Martijn van Sonderen, and Thijs de Vlieger announced that the group would split at the end of 2020; the final chapter in a hugely successful 20 year career that saw Noisia break new ground for drum & bass, and become one of the most respected outfits in electronic music (see career timeline).

Faced with no festivals in 2020, Noisia decided they’d release a live version of their ‘Outer Edges’ AV show, the touring show which surrounded the release of the ‘Outer Edges’ album. Available late 2020, the ‘Outer Edges Live’ release featured their blistering 25 track live set, accompanying the album was the film of their Outer Edges Live show at Roskilde 2017; the sixty minute film captured one of the most impressive AV shows in contemporary electronic music. The full film can be viewed on Noisia’s YouTube channel.

Noisia’s first new music for 2021 landed in June in the form of ‘Supersonic’, a long anticipated collaboration with Skrillex.

Post-2021, the trio’s solo recording activities include Nik’s solo project, Sleepnet, launched in March 2021 with the ‘First Light EP’; the music explores different stages of loss, grief and rebirth, and some of the tracks contain fragments of sounds and music that were originally intended for Noisia productions over the past two decades, but never used. His collaborative house music duo, Body Ocean, with The Upbeats’ Jeremy Glenn, launched with their first EP in late 2020. Recent single ‘Nutrition’ came out via Box Of Cats, they remixed ‘Anything’ by Alison Wonderland & Valentino Khan to great acclaim, alongside releases on mau5trap, Mad Decent, and STMPD. The pair are playing forthcoming shows in New Zealand, and Australia: “This project is more about un-learning the rules than about technical one-upmanship. We want to let go of what we know and what is comfortable, we want to create new combinations and allow for as much eclectic experimentation as we can”.

Under his moniker Thys, Thijs recently launched his own label Eccentric O, with the debut EP dropping last week on August 13th. In 2020, he played a now legendary DJ set with Skrillex and released his ‘Sleeping Beauty Dreams’ album; an adaptation of the score he wrote for the eponymous dance performance. At the end of that same year, Thijs co-composed and produced the music for the film ‘Biomimicry’, by Iris van Herpen and the Dutch National Ballet, that explores the symbiotic relationship between the metamorphic force in which fashion and dance interlace. Further collaborations include two EP’s with Amon Tobin. For future projects, Thijs wants to focus on scoring for films and games, while also writing club and listening music.

After dabbling in the poppier side of the musical spectrum, Martijn and Jaap de Vries are making a move back towards their roots with Zonderling, and getting ready to release more music soon.
Besides working on Zonderling, Martijn is currently writing and producing for a variety of artists and projects.