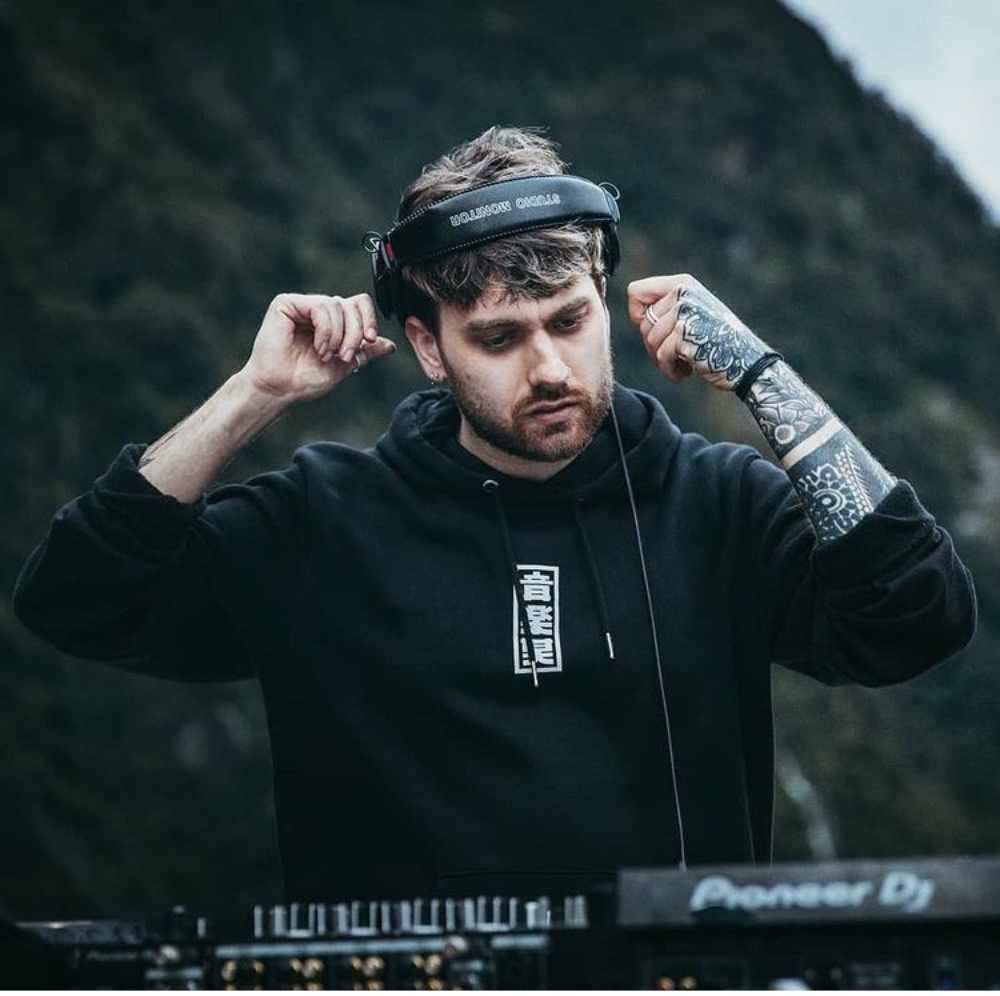 By Anthony MulhollandSeptember 21, 2021No Comments

Having already achieved so much in such a short space of time, we spoke with Shogun Audio’s very own Monrroe to find out a bit more about him and what to expect from him in the future.

What have been your musical influences growing up? What has shaped the artist we know as Monrroe?

Monrroe – I was brought up on drum and bass originally. My mum was well into old school jungle, like: Dillinja, DJ Zinc and Ganja Crew. I also listened to a lot of trance, as well as dance music in general — it was quite a nice way of growing up. As I got older, I started growing out of it a bit. I hit that classic emo phase, during my teens, where I really wanted to listen to Metal and Punk. This is where the want to make music came from. I started playing guitar and joined a band. I was listening to bands like Joy Division, they were a massive inspiration for me as a whole and that’s where the idea for the Warsaw EP came from. Although it sounds nothing like them, it stemmed as a tribute to Joy Division because that was their old name. I wanted to give a hint to what I have always loved musically. Later on, I realised being in a band wasn’t for me. I then decided to pursue music production. My love for drum and bass returned, from when I was a kid — everything had come full circle. I was shelling out the jungle stuff again. Then one day I heard ‘City Life’ by Logistics. This was the first liquid piece I’d ever heard, I didn’t realise drum and bass could be so emotional. I’d say that this is what kick started everything for me.

Why follow a career in music within drum and bass?

Monrroe – I originally was producing metal and punk tunes, which then led onto producing electronic stuff because I wanted to produce something with a similar upbeat and free-spirited energy. Then (as I said before about the ‘City Life’ tune) I realised you could put emotion into these electronic tunes, whilst still maintaining its energy. Discovering liquid showed me you can combine depth with high energy, getting this nice happy medium. Artists like: Alix Perez, Halogenix, Dillinja and Spectrasoul have always been right at the top and have given me the inspiration and drive to succeed within the scene.

Fastforwarding a little now, what’s been the best thing about working with Shogun Audio?

Monrroe – Honestly, it’s been amazing. From working on my own to having this team behind me, who know exactly what they’re doing, is crazy. They give me a roadmap of what it is I need to be doing and where I need to be going soundwise. The label manager, Pete (Deadline), and Ed (Friction) have helped me find a sound I should be aiming for. It’s taken me a while to get there. At first, I’d been typecast as a straight liquid artist; which isn’t what I set out to be because any set I’ve done has been more tech-based songs — with some jungle thrown in. So going with Shogun was a conscious decision to try and escape the solely liquid sub-genre and pursue a deeper and darker sound. Shogun’s track record with artists has been impressive and I have definitely benefited from such guidance. They’ve been stepping it up with the likes of Gest, Koherent, Pola & Bryson and the GLXY boys, it’s great to be associated with the label and amongst such good artists. Hearing all these great tunes is inspiring. Hearing these boy’s tunes makes me step up my game too.

You’ve collaborated with a lot of artists. How has that been?

Monrroe – Every time I’ve collaborated with an artist I’ve learnt something new and given something new that I wouldn’t have thought of. Especially with vocalists — I’ve collaborated with a lot of them. Nowadays it’s all over the internet, I’ve hardly met a lot of the vocalists I’ve worked with. I’ve met Emily (Makis) and Zara (Kershaw) who were amazing to work with. It was also really nice work with Riya on the tune ‘Closer’. I grew up listening to a lot of her stuff — the open pages stuff she did with Lenzman. I was playing at liquicity festival a few years ago and knew she was there. I wanted to approach her about a collaboration without being too cheeky. But then, I was mooching around the crowd and randomly bumped into a guy who turned out to be her husband. He told me that she’d wanted to work with me for a while, which was crazy to me, then he introduced me to her that day and we sorted out the collaboration for ‘Closer’ which is now on my EP ‘Warsaw’.  In the project, I also worked with Ruth (Royall) and Operate. Operate is someone I’ve been into for ages, I knew I needed to get in touch with him as soon as possible. He was wicked to work with. Ruth’s workrate is mad, I sent her the track and within a couple of days she sent me a draft. The final version was done within that week, which is crazy.

Your sound has branched between minimal and liquid over the last few years, have you got plans to explore other sounds within the genre?

Monrroe – ‘Warsaw’, the last song on my latest EP shows the sort of jungle sound I want to explore more. Pete and Ed were keen on me to try something a bit different, just to get a bit of variation on the EP. So, I thought, why not jungle? Being with Shogun, it will definitely give me the opportunity to do this. It has been annoying through the whole Covid pandemic that I haven’t been able to test out these new sounds at events. I’ve got a rough Idea where I want to go for the rest of the year. I’ve got a couple more singles to release, with the minimal and liquid vocal direction being my main area of production. There should be another EP towards the end of the year, and my plan for that is to go for that mixture again of deep and dark sounds. Similar to what Visages and Offline are doing. Combining these deep liquid sounds with a more, dark, tech-based vibe.

I want to know about your songs ‘Never too Old’ and ‘Out of Time’. Your two most successful tunes, to date, have hit some real heights in the DnB scene. How did the great reception make you feel?

Monrroe – Reception-wise, it was crazy. Seeing those tracks going the way they have blew my mind. I would never have seen that happening. Being behind the production, I thought the instrumentals weren’t great. Without Emily (Makis) and Zara (Kershaw), the tracks wouldn’t be what they are. Hearing other DJ’s play those tunes is just incredible. It’s still something I don’t think I’ll ever get over.

Talk to me about going to New Zealand at the beginning of the year? It must’ve been so special being able to play at raves again, especially as the UK was in lockdown.

Monrroe – It was mental. Going from the UK, where there was nothing to do, to jumping straight into the deep end and meeting so many new people was special. Playing to the New Zealand locals and seeing what they were about was great. Seeing the New Zealand scene was interesting for me. It’s different to the UK scene, for sure. Everyone there was just so nice and welcoming. The scene over there is just so strong. When I played some of my vocal tracks they knew the words to them better than me, this was crazy to me. It blew me away. It was such a nice experience, we had a tour guide who looked after me and the crew. We got to see a lot of beautiful sights. I’d, without doubt, go back there!

How has Covid-19 and lockdown influenced, affected and maybe even shaped you as an artist?

Monrroe – To be honest, I really appreciated the first lockdown. I was chipping away in the studio and grinding out as many tunes as possible. It was the period of time where the Warsaw project came about. I was also studying a load of different techniques I previously never had time to look at in terms of production. I was also focused on getting into better shape physically and mentally. I just wanted the time I had to myself to be a good experience. But the second lockdown wasn’t great. I took a massive hit mentally. It then became an effort to carry on making music. A lot of my inspiration, when making music, comes from being in the dance. Hearing music played out on sound-systems is such a big thing for me. Without doubt, the second lockdown was just me forcing myself to make music. Just the uncertainty of what was going to happen really contributed to me hitting a brick wall. It would’ve been in the back of a lot of artists’ minds, whether the scene was going to hit a big decline. But, again, having the time to experiment with sounds I wouldn’t usually have was so important. With the third lockdown, knowing that I was going to New Zealand was a real sweetener. Having that focus gave me the drive to be in a good mental state. I’m glad we are on the other side of this pandemic. I have a lot of bookings going ahead in the second half of this year, there’s a lot to look forward to event-wise.