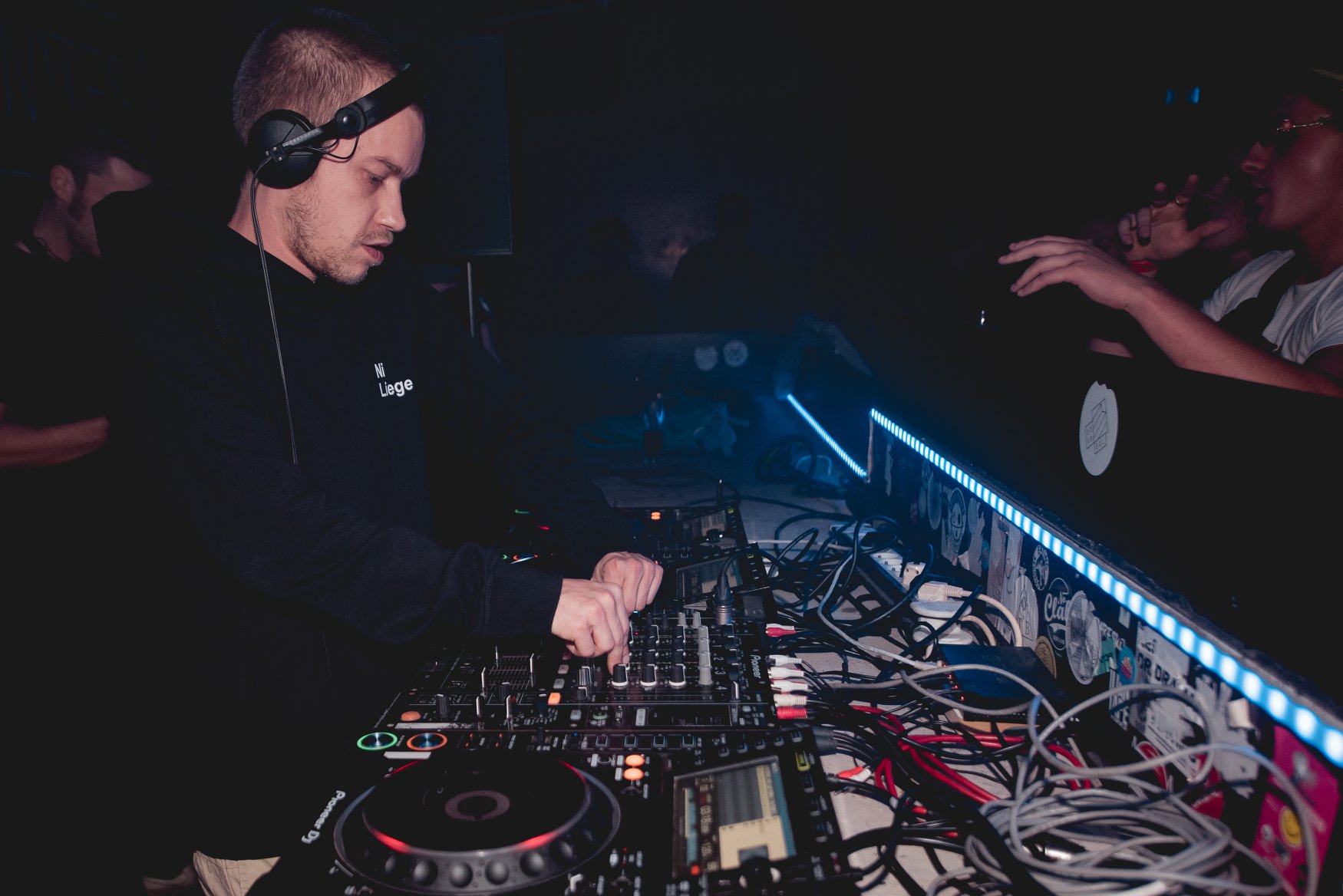 Goat Shed sat down for a chin wag with Belgium bass bandit and all round legend M-zine. We take a look at his forthcoming Umbra EP on the legendary record label, Dispatch Recordings.

Goat Shed: How long has the project been in the works?

M-Zine: I started it a year ago. One of my major goals when first lockdown came was to write a solid EP for Ant because I’ve been doing a lot of music with them over the years and I had this free time to fill!

Goat Shed: Were these ideas you already had floating about or was it a blank canvas?

M-Zine: Blank canvas definitely. There’s a couple of weird ones on there, like permeate, the mix down is a bit muddy but that’s what makes it. It’s a bit different. Okay, it’s a two step roller but it just sounds different to the rest of the EP, it has a different vibe to it.

Goat Shed: Was having a variety in the tunes important?

M-Zine: Yeah, it’s a bit of everything man. “Loon” is a bit more experimental and a bit more bleak and Stark in its sound design. It’s just a more chilled out “let’s explore the groove” kind of thing.

Goat Shed: What was your journey into Drum & Bass?

M-Zine: To be honest I was mostly into techno and minimal techno before I was into DnB. I went to my first drum & bass party when I was 20 maybe. It was Star Warz in Ghent. I just got hooked man.

Goat Shed: Can you remember the line up?

M-Zine: It was like an XL edition with dbridge, Zero T, Calibre, Artificial Intelligence and Ed Rush & Optical. It was absolutely bonkers man! Belgium is quite a big country for Raving. Like party until the lights come on. Belgium’s are always in for a good party, since the 90s.

Goat Shed: Belgium had that reputation for its big techno scene in the 90s, I guess a follow on from the whole movement in Berlin?

Traveling from one club to the other. I would have loved to grow up in that scene, it must have been amazing. Even talking about it gives me chills because my parents lived it and you only hear stories man, and the stories are wicked.

Goat Shed: Has Belgium influenced the style in your production?

M-Zine: Yeah, there’s just something to be said about the tracks back then, they were formative; Even for the early UK rave scene they were formative records. They got sampled the shit out of because they were dark and different, something no one had ever heard before. It was just people messing about with synths basically, truly messing about with them. Making them sound as unnatural as possible. They were real pioneers.

Goat Shed: When did when did you start to notice that DnB was taking its hold in Belgium?

M-Zine: I was in my 20s man. I saw Ghent had a massive scene, there were parties with the likes of Loxy, Commix, Spectrasoul and Break. That just got me hooked man. I even booked Icicle and Spectrasoul for my own parties. I Like the whole soulful, yet techy sound. Although things are changing now, if people keep rinsing the same formula over and over it just gets boring.

Goat Shed: I think people are starting to get over the whole fog horn thing now aren’t they?

M-Zine: Yeah just about. A good tune is a good tune don’t get me wrong, but nowadays there’s just so many YouTube tutorials, everyone can rinse a sound, everyone can sound like anyone they want to. There’s not really a need for a unique identity anymore. I think that’s so underrated. Just having your own sound, and not worrying too much about what everyone else is doing.

Goat Shed: Who are your favourite artists are at the moment?

M-Zine: There’s people like Molecular from Portugal, he’s got the Funkiness. He’s just got a certain sound man. I can’t explain it, it’s like room to groove in the music if that makes sense?

Thematic is also one of those producers. I really admire their sound, absolutely amazing mixdowns. It’s all about getting that mix just where you want it to be, The mixes are so unbelievably high quality and high definition.

Goat Shed: Do you take a similar approach when mixing down a track?

M-Zine: As long as I can get my music as 90s sounding as I can get it to be with computers. That’s always the aim. In that era all the gear was so essential to the music, even if the quality was bad it had a rawness you just don’t hear anymore.

Goat Shed: Do you use fully digital producing setup? Do you ever dabble with a analogue/modular set up?

M-Zine: Not really, I’m very much still sample based. I just love twisting and mangling samples. I’ve got a UAD sound card so I use some fancy emulation plugins like Moog Filter, Puig Tec EQ, Shadow Hills Compressor, all the goodies man.

Goat Shed: You’ve released on some pretty big labels especially UK based ones. Like Dispatch, 31 Recordings, and Commercial Suicide. Have you ever felt pressure to move to the UK to be closer to the scene?

M-Zine: Not really, I’ve got a great vibe here in Belgium. We have Bredren, One87, James Marvel among many other amazing producers. it’s a family vibe man. If we go to Sun and Bass or something it’s all that crew. It feels like a steady solid relationship has been built over the years. There’s people like Phase as well who is a big, big part of the Metalheadz family. Everyone knows each other, we’re all trying to push each other basically.

Goat Shed: Why did you name the EP Umbra?

M-Zine: Umbra means shadows basically. The artwork is an eclipse, or part of an eclipse. So you can see the grey scales of the shadows right through it moving out so I just thought the name worked. Shadows also lends itself to the minimal aspect of the tracks.

Goat Shed: What’s your favourite track from the EP?

M-Zine: “Umbra” definitely. It’s just apache man, that apache break. I just chalked it up with old school techniques. Like literally going through the layers of the break and finding the perfect timing for my liking.

Goat Shed: Progression has to be an important part of the production process for you. For instance “Device”. The progression on that is insane. Is that something you think about when you’re writing music?

M-Zine: Always, progression and arrangement IS the tune basically. I’m very techno inspired and techno is basically four tracks playing together, just endlessly repeating and evolving the sound. I like that in Drum and Bass as well. Keep it as minimal as I can get away with and make sure it’s never doing the same thing twice.

Goat Shed: When writing music do you think about how it translates into a clubetting?

M-Zine: Definitely! Always! They go hand in hand. With speakers it’s not only flat, it’s three dimensional, they go three ways. There’s depth as well, the depth in the speaker is so underrated.

Goat Shed: How do you get the inspiration to start writing new tracks?

M-Zine: I’ve been writing music for 10 years, if I don’t know how to write a tune by now it would be a bit sad. I generally just get an idea, it can be any time. I could be lying in bed just having had a spliff watching TV and it just pops into my head!

Goat Shed: What was the last event you went to before lockdown?

M-Zine: Bredren invites. It was S.P.Y and Arkaik and it was fucking bonkers! It was literally 5000 people inside going apeshit!

Goat Shed: Well sadly that’s all we have time for, it’s been a pleasure! Good Luck with the release.

M-Zine: Thanks man, it’s been fun!