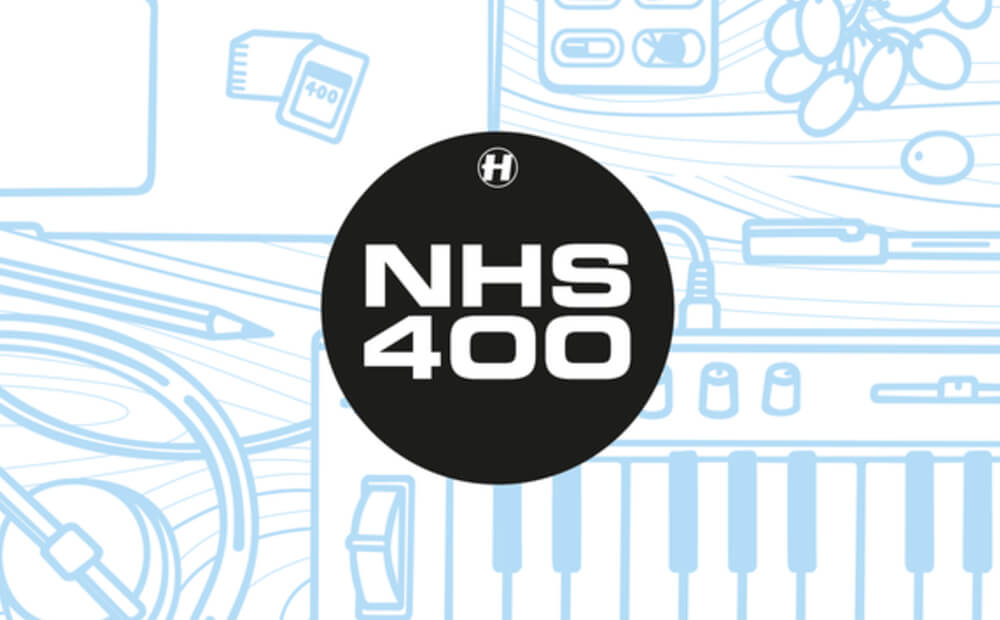 It’s customary to start off a review of a compilation EP with a nice, neat potted history of the label putting it out but if you’re reading this and haven’t heard of Hospital Records then chances are you’ve arrived here by accident. (But hey, stick around. Because let’s face it, you need something to cheer you up if you’re doomscrolling the words ‘NHS’ or ‘Hospital.’)

For the initiated, Hospital records needs no introduction. Though it’s doubtful that its co-founders Tony Coleman and Chris Goss had any idea that their label would become one of DnB’s best-loved brands when it swung its door open back in 1996. But here we are 24 years later celebrating its 400th release with a monster 6 tracker that features some huge collaborations from artists across its roster. And it’s just in time for record store day which means we get a tasty limited-edition vinyl thrown into the mix too.  Lovely.

Head honcho London Elektricity and DnB demigod S.P.Y kick things off with ‘Find Another Fool’. The track teases us in with the delicate tambourine rattles and atmospheric strings before Lianne Carol’s (literally) award-winning vocals cut through with the sass and power we’ve come to expect from London Electricity’s long-standing collaborator.

Then comes the unmistakable sound of S.P.Y’s signature reese bass and, at this point, we insist that you remove yourself from the vicinity of any children or small animals who now are in imminent danger of being dropped-kicked out the window as the drop hits.

London Elektricty has long been known for his soulful take on DnB and to hear that collide with the utter filth that S.P.Y consistently manages to conjure up is truly something to (audibly) behold. Throw in a vocalist who once managed to make Goatshed cry when she performed with the London Elektricity Big Band at Let It Roll, and you know you’ve got a guaranteed classic on your hands.

Next up is Degs. Or if I’m being polite Bop x Subwave x Degs. But in reality, the stripped back beats are only really there to provide a suitable haunting backdrop for Deg’s distinctive crooning. But for good reason. Because the bars and lyrics in ‘The Shade’ deserve to take center stage. As he says he ‘ain’t gonna sit here and scream for unity’ instead he’s penned a poignant tune that speaks of both racial injustice and his eternal hope for a better world. ‘The world is all of us.’ Listen.

The rollercoaster ride continues with Makoto and Urbandawn’s ‘Magic Eyes’, an absolute stomper with more than just a touch of 90’s energy to it. Neither the nostalgic piano refrain, tribal echoes or oldskool vocals from the legendary MC Conrad would be out of place at a 90s rave. But it’s all brought bang up to date with a grimy bassline that I’m pretty sure has been mathematically formulated to trigger the ‘gun finger’ brain function.

Then it’s time for another complete switch up in the form of Whiney and Mitekiss’ ‘Broken Bones (feat. Ruth Royall)’. Coming in just past the mid-point of the EP, this track serves as a welcome breather from the lyrical and musical intensity that has come before. It’s the type of chilled-out liquid roller that Hospital has gained a global reputation for and feels a lot like a warm hug for your soul.

Next is Fred V and Logistics’ remix of the Stranger Things theme tune. Ok, maybe not, but the intro and synths on ‘You Keep Me High’ do have a very 80s Sci-Fi vibe about them. The layers on this tune are more intricate than we’ve seen elsewhere on NHS400. This is a real creeper of a tune that twists along with flickers of distorted bass, ethereal keys and techy glitches. A great example of ‘thinking (wo)man’s DnB’ as I presume some people will like to call it now I’ve just made it up.

So, just how do you close out what has so far been a stellar selection of tracks? With a ghostly orchestral choir and splashy breakbeats of course! ‘Leviathan’, the epic brainchild of Medschool graduates Keeno and Polaris, is the perfect tune for this time of year as the nights draw in and Halloween looms. It has a truly chilling quality about it that stays with you long after the last note plays out.

From the offset, it’s clear that the track listing for NHS400 has been meticulously thought-out. It leads with the big guns, takes you on a winding journey though the genres and then ends on a message from some of Hospital’s freshest recruits. One that says, ‘we will never stop pushing, we will keep moving forward.’ Which is why we can’t wait to see what the next 400 releases bring.