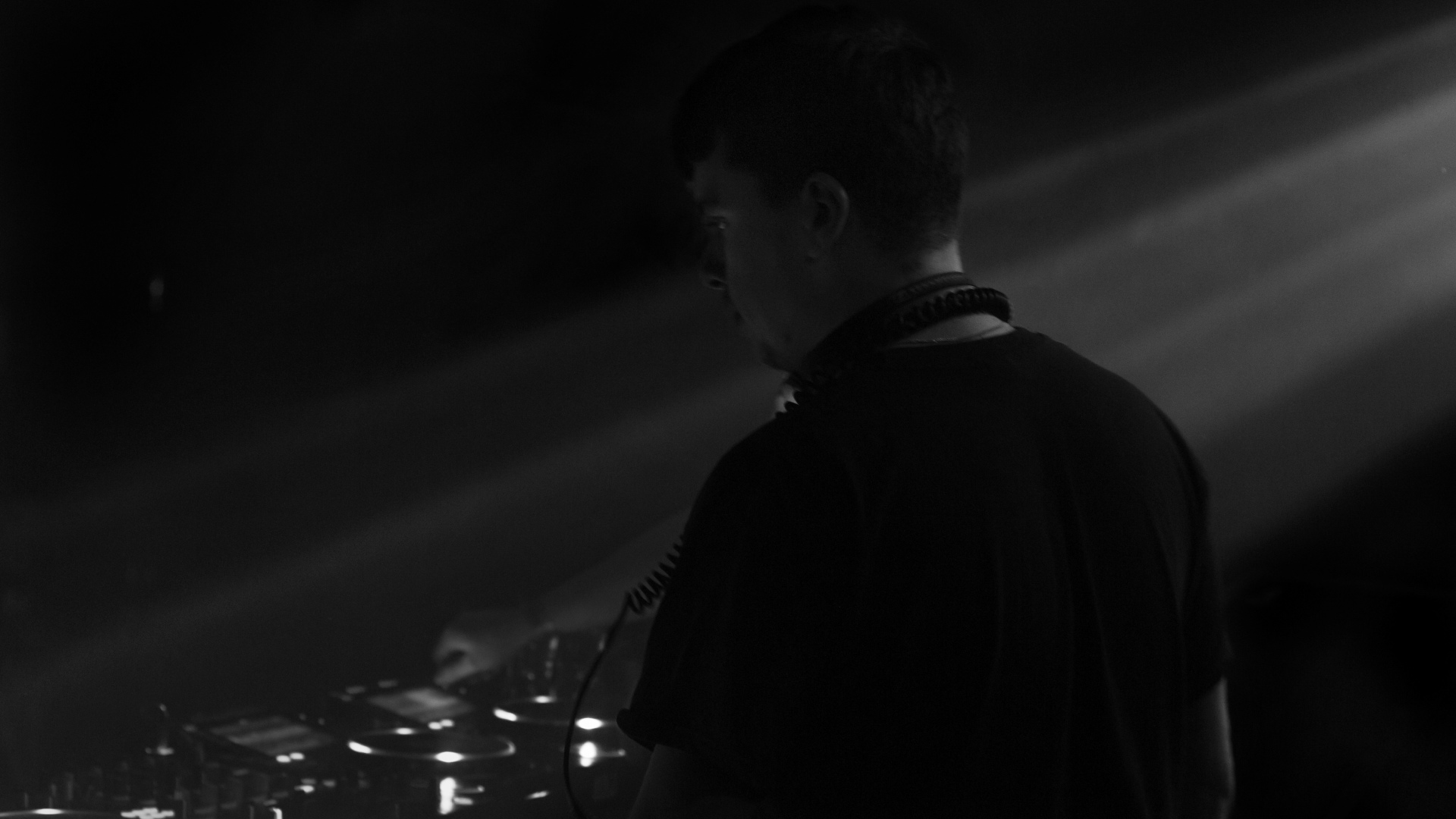 We were lucky enough to get to chat to one of the most promising talents within the drum’n’bass scene. Going by the name of Gray, the London-based DJ, and producer, already boasts an accolade of hard-hitting classics that will be played for years to come.

Off the back of his triumphant ‘Rubadub Remix EP’, which has fittingly rounded off what has been a brilliant start to his career, we take a look at his achievements so far — as well as what’s to come from one of Born on Road’s very finest.

Let’s start with when you were growing up. How were you enticed into music production?

Gray – Up until the age of 11 and 12, I was just listening to what my mum and dad were listening to. I really took it into my own hands after that. I had family friends showing me some old dubstep, techno, and electro material. All really cool music. One of them gave me 3000 songs to put on my laptop, which took hours to transfer. I mainly took a liking to the dubstep stuff — namely artists like Skream, Benga, and Rusko. It was just sounds I’d never heard before. I’m one of those people, when I don’t understand something I’ve got to get stuck in and try to understand it. If I hear a sound I don’t know how to make, I’ve got to try and learn how to make it. I started learning how to produce on the fruity loops software and watched loads of tutorials on YouTube. I then dropped out of school to go to BIMM, a music college in London. It was way behind what I was already doing, but it allowed me more time to myself and my music. It did teach me some stuff around the business side of the music industry. After that, I moved to dBs Bristol which, again, was still a little bit behind what I was already doing — but moving to Bristol meant I was able to link up with Born on Road.

So, why the drum’n’bass scene?

Gray –  There were some kids in my school who were really into their jump-up drum’n’bass. They took me to a squat rave when I was 15 and it was mental. At that moment it turned into my goal. I was processing the fact that there were people here who were getting paid to perform. I now had a focus on drum’n’bass, whereas before this experience I was just experimenting with different genres. It is very important to take influence from different genres. There’s always been a squat party, and underground party, influence in what I do — it’s one of the pillars of my musical upbringing. Before I turned 18 I could only go to squat raves, and I was getting booked pretty much every weekend to play at these events. It was all jump-up, but I at least had something going. Once I got older and discovered the rollers and jungle nights, I realised I liked these sub-genres more. I stopped getting bookings at the squat raves because no one there really wanted anything but jump-up. After that, I was just jamming at home; working on new stuff, meeting new crews, and mixing with new people.

Talk to me about joining Born on Road. What’s it like being a part of the label?

Gray – At first, I’d heard of them, I knew they were a small collective from Bristol — this was before they were big within drum’n’bass. I saw them at a few festivals and I really liked their sound. I’ve always liked the ragga and jungle style. Seeing them fuse together all the sounds I love shocked me. I did a bit more research and saw the type of artists that were in it. One day, I turned up to an open invitation live stream they were doing. I’d already emailed a few tunes to Aries and Kelvin. They were really receptive to me and my songs. For aspiring artists, there’s a lot to be said about going out and meeting the artists in person. What a lot of people don’t realise is how many messages, and emails, these artists get. Being able to put a personality to your approach makes a real difference. Actually being a part of Born on Road has given me a sense of freedom. Now that I have them, I don’t necessarily need to impress loads of people anymore, I know they will back me regardless. We all push each other to perform at a higher level. We all have love and support for each other’s music. We can all genuinely say we are friends beyond music, which I think is important.

You’ve collaborated with a wide range of artists. What’s that been like? Any plans for future collaborations?

Gray – I’m always inspired by everyone I’ve worked with. Watching the different ways in which producers work interests me so much. For me, collaborating isn’t about releasing music. Obviously it’d be good to put a tune out, but I just want to link up with other artists so that we can learn from each other. Everything is a learning process. When you collaborate with other artists it humbles you — seeing them do great things makes you step your game up. I have to admit, when it came to finishing songs I was a nightmare. I’m better now at knowing when to let go and release the song. I’ve loved working with the likes of Crossy, Bish, Sigma, and Kara. In terms of recent link ups, I’ve been in the studio with the likes of Enta, Trex, Diagnostix, and Bladerunner. I also want to work with some New Zealand-based artists because I think it would be really cool to merge UK drum’n’bass with theirs. Globalising the sound would be great, they’ve already got a huge following over there.

Let’s look at your, very successful, ‘Rubadub Remix EP’. How was the whole process?

Gray – I knew I wanted certain artists before the EP even came about. For me, L-Side was such an obvious choice. I love his sound so much. Alcemist is a really good mate of mine and his sound is very cool. What he did with ‘The Chopper’ made it very interesting. Limited’s take on ‘Blood’ was probably my favourite from the EP. He’s the type of artist I’m all about. He produces bassy and energetic tunes. They are all quite similar sonically, but you can definitely tell the songs apart. Funnily enough, ‘Rubadub VIP’ was never meant to come out. I was playing around and made it as a joke. I didn’t even know if I wanted to play it out to people. There’s a ‘free party’ scene in Bristol with an emphasis on hard trance and donk, so I thought ‘why not make it as a laugh?’ The first time I showed it to Kelvin he wanted me to send it to him straight away. At first, I was coerced into releasing it. The reason I changed my mind is because I saw the energy it gave people at the first venue I played this track. I believe it was at the Attic Bar, in Bristol. In the end, it’s done well and it’s good to get that kind of stuff released. It’s nice to wrap up this chapter of my production. I don’t want to be an artist that doesn’t keep it moving.

‘Rubadub’ and ‘One Spliff’ are two songs that have reached dizzying heights in the DnB world. How did that make you feel?

Gray – They made me. The success there has allowed me to pursue music full-time. My lifestyle is what it is because of these two songs. There’s obviously other factors too, but I’m able to do what I do because these two songs allowed me to. It’s an amazing feeling. At the same time, there’s now pressure to keep it moving — it’s passed 10 million streams. I don’t want to be known as a one trick pony. Funnily enough ‘One Spliff’ almost didn’t come out. When I originally sent it to Kelvin and Aries they loved it. I then went away and changed it, making the tempo faster and more energetic. When I sent it back to them they didn’t like it as much as the original one I had made. I stood by it. Thankfully they backed me by releasing it in the end — and its done well. I personally didn’t think ‘Rubadub’ was that special, so I was surprised when it did so well.

Lets talk about some of your favourite sets. You’ve had tons of highlights!

Gray – The first time I played at E1 was one of my favourite sets. With Zoro and Alcemist. The whole show was insane. I’m usually not a ‘back to back’ kind of guy, but that night was special. I know I played there again, but that first time can’t be beaten. The reactions from the crowd was mental. I still have all the videos. When I played at the tangled roots stage at Boomtown was another highlight. It was the first festival I ever went to, so it was always going to be special. A more recent one is when I played at Balter Festival, on the Hex stage. I was playing after Goldie. He was really friendly with me — meeting him was crazy, this guy’s the real deal. I really enjoyed myself. I guess with festivals they always feel different. You can get more musical with it. In the future, I’d love to play in the main rooms at Fabric and Printworks.

As someone who’s very much in and amongst the producing game. Are there any producers we should be looking out for?

Gray – Diagnostix for sure. He is someone that is already gotten so good — in such a short space of time. And, of course, Kara. She’s already such an inspiration to a lot of women within the scene. Even though she won’t admit it. It’s really great that she’s putting herself and her talent out there.

Looking ahead, what type of projects and ventures are next for Gray?

Gray – For me, It’s never been about trying to develop a certain sound. I’ve always just made something because I’ve enjoyed the process of making it. I’m not worried about making a certain sound or style. If you make what you like, the rest will follow. I’m in a place now where I’m experimenting a lot more. You’ll probably start to hear a lot of different material from me soon. Not all necessarily in that jungle drum’n’bass type of vibe. As I said earlier, Born on Road has given me that freedom. This year I’ve got a lot of events, and some tours, that’ll be announced soon. Music-wise, I’m just trying to get into the studio with as many people as possible. I’m working on developing myself as an artist. I want to take it to the next level sonically. I want to look at a wide variation of sounds. I’ve got quite a few tracks waiting to come out this year, so I’ve got that to look forward to.