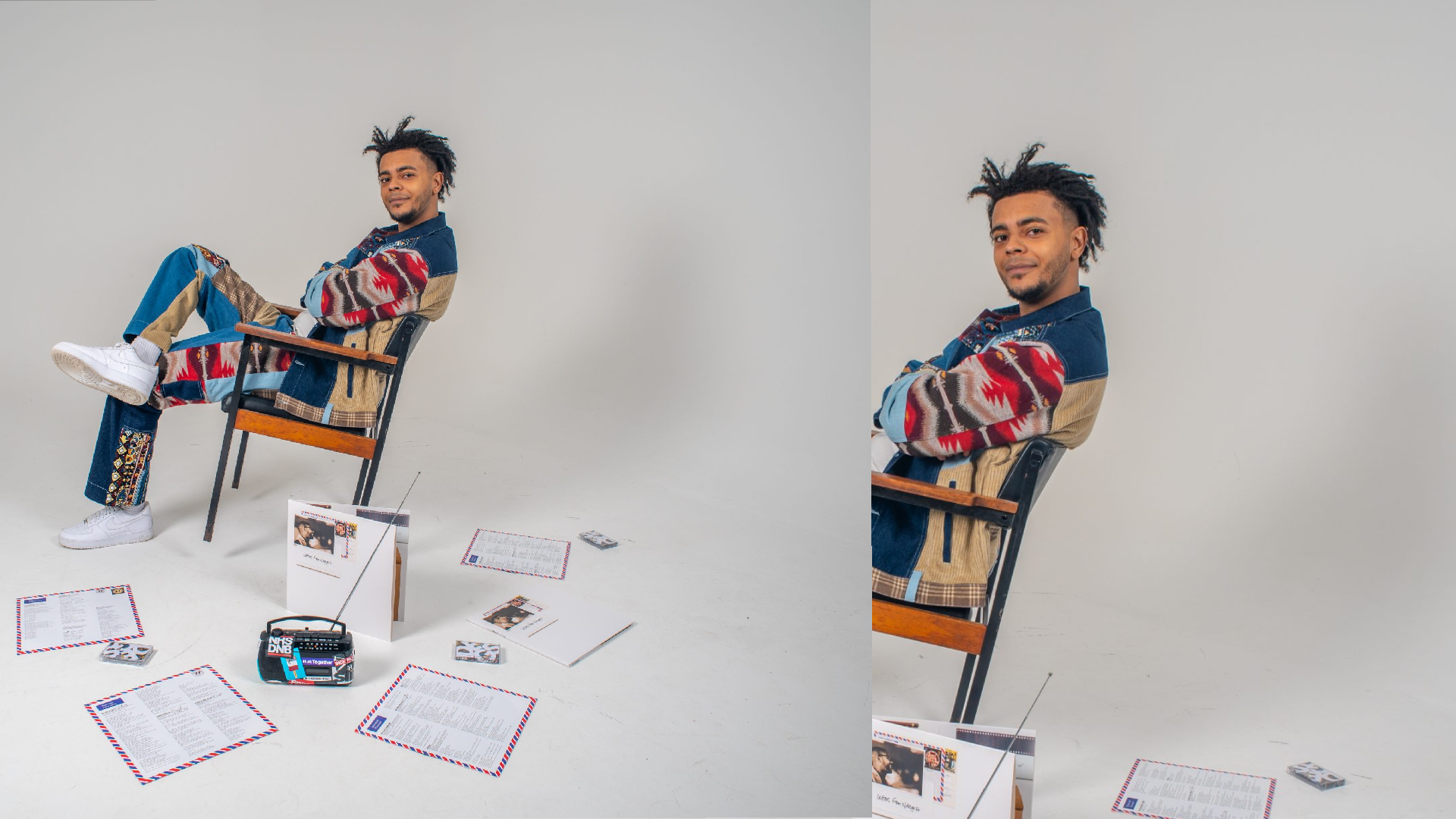 By Anthony MulhollandMay 5, 2021No Comments

With his new ‘Mixtape Sprayout Volume 2’ out on Hospital Records, we thought we’d ask Degs some questions!

So, before we get into the mixtape, tell me a little bit about your musical influences? What has helped shape the artist we all know as Degs?

Degs Just a crazy mixture of things. I was influenced by people around me. My mum is quite religious so i grew up listening to a lot of soul and Motown. My Dad was a bit of a rock and roller so he listened to people like Led Zeppelin. It didn’t resonate with me as much, but there was definitely a huge mixture. As I got older it was mostly just hip-hop. I was a big fan of G-Funk and Nate Dog. Mostly just old school New York Hip-Hop like A Tribe Called Quest and Slum Village. I probably got into DnB a little later than most people. It was probably when I was about 14 or 15. I remember hearing Bad Company UK, ‘Inside the Machine’. That was the first album I ever heard. It was sent to me by a friend and I remember listening to it and being confused. I didn’t understand where the drop was and I didn’t understand why the intro was so long, but there was something really captivating about it. Most of the music that I make, weirdly, isn’t influenced that much by DnB; but more RnB and Hip-Hop. And now, later on in life, the likes of Calibre, Lenzman, Dynamite, Fats and Eksman. I could reel off artists all day.

Why Drum and Bass?

Degs When I first heard the music I was in my teens and I was kind of rebellious. The idea behind rave culture really resonated with me because it was kind of rebelling against the establishment and being free to express yourself. So that aspect was really appealing to someone who was trying to work out what they were doing with their life. I also found that musically, I was always blown away by its diverse array of styles which can fit into the genre. As well as the different avenues that you can take, whilst still maintaining its fast and energetic tempo. I just found that crazy and it’s what drew me to the music. From a social aspect, I grew up in a town where we would always travel down to Brighton for raves. All of my mates were into DnB so that made a big difference. The music is just so diverse.

How does this project differ from your first mixtape sprayout, 2 years ago, and your debut album ‘letters from ndegwa’, last year?

Degs The thing about the initial mixtape was that it was based on the videos I was putting out in mid-2017 over other peoples tracks and it just got expanded into an 8 track project. This new mixtape is very, very different. Basically, Hospital asked me what I wanted to do after the album, we were still in lockdown, and I said I wanted to do another mixtape. But this time I wanted it to be all original tracks. I wanted to produce a few myself. I wanted to get some of my best friends involved and some of my heroes involved too. Whilst also finding some strong up-and-comers. It’s a very different project. It’s still got the mixtape kind of vibe; it’s very bar heavy and very lyric heavy. But it brings in different kinds of sounds from the spectrum of DnB and, obviously, it’s much more collaborative than the first mixtape.

I mean, the collaboration list on this project is so captivating. How was it, working with an array of such established artists; as well as some up-and-coming talent?

Degs It was great. Normally there’s quite a bit of red tape or a bit of bureaucracy around working with artists outside of the label, but Hospital were great. They told me to go out and find my people and do what I want to do. The specific people I contacted for this were some of my heroes like Harry Shotta, Evil B and Dynamite. Artists I’ve been listening to for most of my adult life. It was amazing to learn from their vision and observe the things that they do. But also, the humility in dealing with them was great. I didn’t feel like I had any different conversations working with them than I did with some of my best pals like De:Tune and Citrusfly. Whether I was hitting up Evil B or Harry Shotta, all the conversations we had were progressive. Harry Shotta finished his part of our project within a matter of hours — it was crazy. I had been really nervous to hit him up anyway, but when I did hit him up he was so receptive of the project and understanding of the time constrictions. It was a real learning point. It showed me that if you want to get to that stage, in anything you do in life, then that is the sort of discipline you need. All in all, it was a great experience; from top to bottom.

I know for a fact that working with all of these artists would have been a great opportunity, but was there anyone on this project you were particularly keen on working with prior to starting?

Degs The two individuals I was probably most anxious to work with were Evil B and Harry Shotta, because of the standards that they keep. It would have been the case with Dynamite but luckily for me, being signed to the Hospital family, I’d already spent a lot of time with him. He’s a very nice guy, a very humble guy and, obviously, a very talented individual. I’d go to them with a blueprint already and they’d impressively turn it around within a matter of hours, showcasing their musicality. Watching them jump on topics they may not have ever even written about and completely ‘duppy’ it was inspiring.

With 13 songs on this mixtape, are there certain songs you are really excited for your fans to hear?

Degs It’s difficult. Every single track is like an individual journey that I had with either the artist or the production. Because I started out as a jump up MC, I am looking forward to people hearing the grittier sounding tracks. So far in my Hospital discography it’s been relatively soulful. I’ve really wanted to show people that this grittier sound is something I love doing. It’s the kind of music I listen to. Although, I have to say I am mainly looking forward to people hearing the tracks with my younger brother Matt (MURIUKI). Purely because we’ve grown up together. We are really close in age so we are quite close as friends. We’ve both made music together, on and off, for years. All four tracks I’ve done with Matt aren’t DnB and I’m very interested to see how they get received. But generally, I’m excited by all the tracks.

The expression of pain and hope are two concepts that are prevalent throughout, how important is it that people recognize these messages? Especially in a time where mental health is a challenge for a lot of young people.

Degs Music is entirely subjective. One thing I love about music is that it can be interpreted in so many different ways. This mixtape was put together bang in the middle of lockdown. It has that kind of theme to it. There are a lot of topics in the mixtape that touch on mental health. ‘Crosstown Blues’ is a story about when I moved to Hemel Hempstead chasing a Sales career and it wasn’t quite made out to what I thought it’d be. The song shows how it impacted me; moving away from my family and not having the security I had before. So hopefully stories like that will be something people can relate to. Even though I touch on some difficult subjects like the unfortunate passing of one of my close friends who took his own life, in the song ‘The Connection’, I always tried to relate it to how I got over these obstacles to keep it as positive as possible. For example, ‘The Connection’ starts off with the death of my friend but then moves onto meeting my current girlfriend. I hope the message throughout the mixtape resonates that you are going to go through some tough times and it is what it is in that respect. You can unpack that to a certain degree, but acceptance is one of the biggest obstacles to overcome. Your reaction to it is based on your mindset and your attitude. Life is pretty rough sometimes, but there are measures you can take to change your psyche and attitude to mitigate that.

What can we expect from you in the second half of 2021?

Degs If the second half of 2021 happens, I am very fortunate that my calendar is starting to fill up quite a lot. Some events are carrying over from last summer. But there are also some new festivals in there as well. I’m looking forward to getting back involved and amongst it. I’ve been writing music for so long it’s going to be nice to get the chance to perform it. I’m going to tour a lot more with the live show with DJ Lens. That’ll be good fun. I have two full projects that have been released during the pandemic so I haven’t had the chance to perform my new music live.