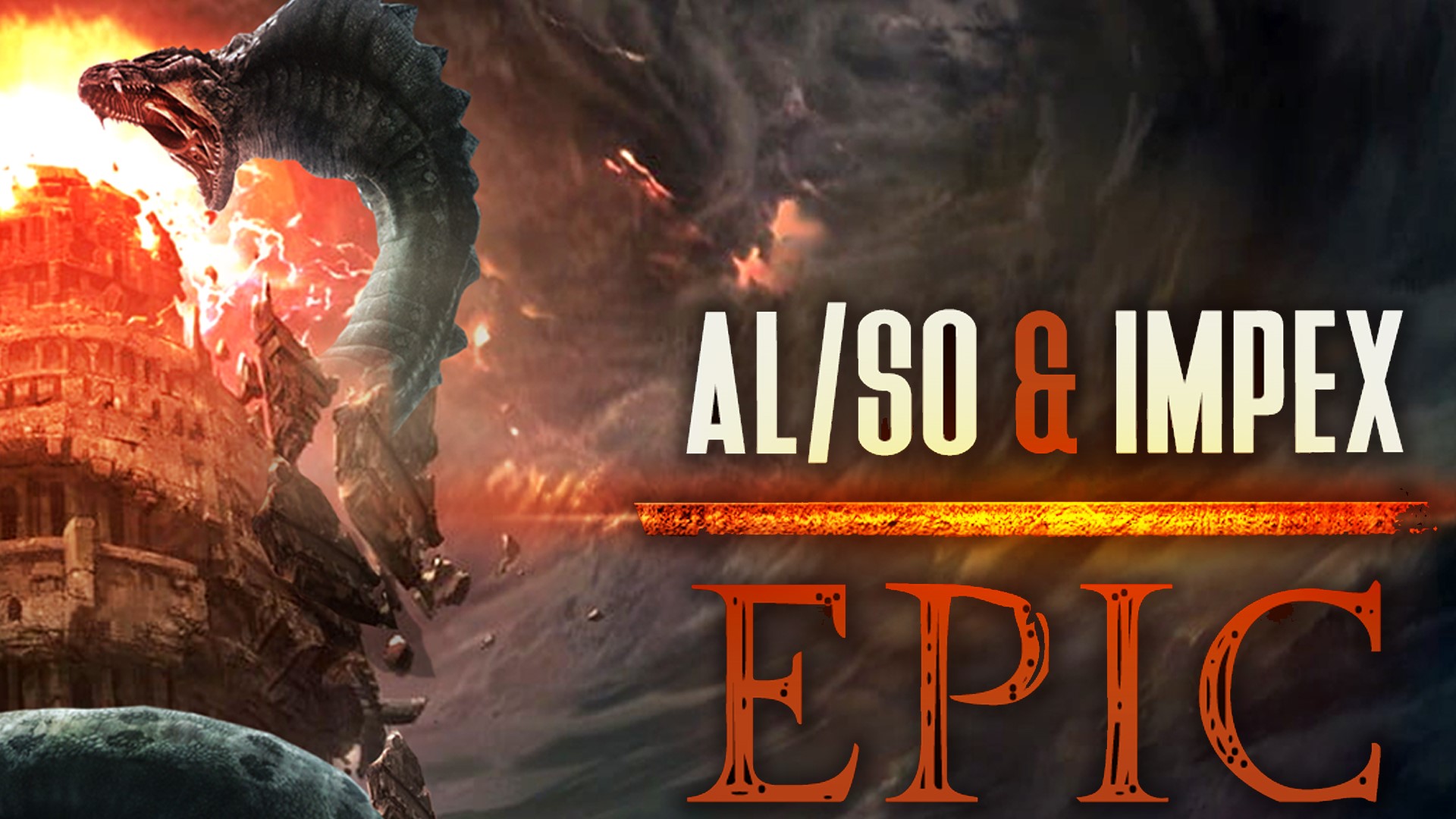 Texas based imprint Boomslang Recordings have prided themselves in never watering down their sounds and committing to the underground, which can be seen through their catalogue of releases which includes the likes of Transforma, Jaybee, Heist, NC-17 and more. Although last Friday, they dropped massive slamming single ‘Epic / House Party‘ from AL/SO and Impex. Portuguese producer Impex brings his no-holds-barred sonics whilst Korsakov figurehead AL/SO delivers his unforgiving sounds and together they’re a force to be reckoned with alongside this brand new delivery.

For its release, we decided to do something different – have the pair interview each other. So dive in below, and grab a copy of their brand new single here.

A – What is your biggest inspiration in life?

I – I believe I would have to say music in general. Music is my biggest inspiration, my father is a musician, I have been playing since I was a kid in metal bands, etc… that was until I went to my first therapy sessions and saw Audio, The Panacea and then it became DnB more specifically but yeah, music is what makes me have a good or a bad day. If i get in the studio and can’t make anything decent, it’s pretty much a depression alert right there.

A – That’s a pretty unhealthy relationship with music… which i have as well. If i have a shitty sesh in the studio, it means that I have a shitty day.

A – Hmmm, i doubt it, I saw Joe Ford struggle for 4 hours because he accidentally switched something on a channel and that ruined his day so, i’m not sure it will ever improve!

A – What are your 3 favorite and the 3 least favorite things about me?

I – Your eyes, definitely are the number one thing haha. The 2nd is probably something that happened to everyone who knows you, like, the first impression is “WTF, who is this crazy dude?” but then when you show your true colors, you are actually a very decent human being. We started talking around the time of the release of ‘Metadone’ on Korsakov and when we met in person, you gave me a hug, so you got me there. So beautiful eyes, tall guy, hugs… that’s it. And I actually haven’t got that much to say to you on the negative side apart from you being the worst agent I have… starting by the fact that you are not my agent, which is wrong and you suck for it.

A – How many shitty snares do you make for every good one and do you feel that snare design is one day gonna be the end of you?

I – Actually I made a bunch of snares a while back for my neurofunk showdown sample pack for Thick Sounds and i keep recycling them just by making new noise layers and playing around with the pitch so, i don’t see myself going into a black hole of depression over snares anytime soon…

A – I might actually buy it soon… oh wait, I already did ahaha keep forgetting about it!

I – Anyways, yeah, I keep using the snares I have, even that one that you say I stole… Might have used it in a couple of tunes actually.

I – Well, your best tune is ‘Party Everyday’, hands down my favorite. And this new remix you are working on is sick so far. I wonder if you had any help with it haha!

A – Well, someone that is definitely not from the Iberian Peninsula may or may not have given a cheeky little trick that ended up shaping the entire tune but that person definitely wouldn’t be a snare stealing Portuguese producer.

I – Hell, the moment I saw the result on that cheeky little thing, I thought to myself : “Why didnt I use this idea for my own tune?! “
I – So moving on with the question, your worst tune…

I – I guess my least favorite is Earthquake

A – Ah, that’s a collaboration so whatever was wrong wasn’t my fault…

I – About my own tunes, my best ones are ‘Funkin Out (unreleased)’ and ‘How Low’ also unreleased…

I – Yeah, that one exactly.

A – That one is sick too, that’s why I want it, although I believe that the Side FX one with the most recent changes might be your best one so far. And ‘Metadone’ too of course, that’s why we released it.

I – Yeah, those are up there too, and also my first tune ever to be released. ‘Bankai’ was released on Raving Panda and I want to make a VIP version of it cause its a banger. I need to figure out how to do it because I lost the original project so… it’s gonna be a hard one.

I – I noticed a huge evolution in your productions in the last year or so. Can you recall any moments that sparked your inspiration and made you go : dude, why haven’t i thought of this earlier?!

A – my main reaction to “great ideas” is usually to do nothing about it, because from personal experience during the last 10 years that I have been creating music, I realized that, if it is a really good idea, it will come back to me again a week later approximately. Most of the time the ideas spark for dnb, is when I am listening to that really forward thinking techno music in the likes of Tale of Us, Mathamei, Flume, etc… where I can see a great musicality alongside a huge technical skill which results in me trying those ideas out and coming up with three different tunes from that one single initial idea. The same happened when I discovered the Arpeggiator haha. Skywalk by Mathame inspired me to make three different tunes including this new remix I’m working on.

I – Who are the artists that keep inspiring you and surprise you with every new release?

A – Droptek is a god. Like a god period. Mandidextrous is incredible, they’re completely changing the game nowadays. For me they are what Imanu was for dnb back in 2018. He was what dnb needed back then, the right person at the right time and that’s why he blew up so hard and they are what dnb needs now. Without a doubt they’re killing it and that’s why RAM snapped them up. So those three are the ones that keep coming up with bangers. On the bigger side, Camo & Krooked with their musicality and technicality.

I – For many people in the dnb scene, a tune is only as good as its snare, are you one of these dudes? Why?

A – No. So many bangers out there with bad snares. I still love them, most of the biggest commercial tunes have the worst drums and I still love them. I guess it’s a taste thing. Your drums for example are very good, they have improved ever since you stole my snare but that’s a subject for a different time haha. I even witnessed Joe Ford stealing one of my snares in plain sight during a live sesh… He literally dragged it onto his folder while talking to me haha douchebag.

I – No idea what you are talking about… I have an Elmar snare here, but it’s in my folder so it’s mine. No questions about it!

I – This AL/SO x impex collaboration might come as a surprise to some folks out there. what made you want to collab with this portuguese unknown dude?

A – Basically, after the ‘Metadone’ release, we kept exchanging tunes for feedback and such, and you sent me a very raw version of a tune, which sparked that creativity that we talked about earlier. So I said, lets collaborate and you said yup, and we made ‘Epic!’ About ‘House Party’, it was pretty much the same but we spent more time trying to change the tune than we did actually making it… Haha three months trying to switch everything on that tune, all to release the very first version of it.

A – Exactly, I guess we ended up with the first version that I sent you right?

I – Yeah, I remember hating you when you wanted to change the entire vocals a week before deadline!

A – Haha yeah, you did the vocals but I was like “I hate these vocals, we have to change everything”!

I – My final question is: if you were a drum set piece, what piece would you be?

A – CHINA (trump style). Seriously, I wish this wouldn’t be my answer but china has a fat sound and I’m fat too so it makes sense that I choose to be the fat thing in the back that people keep hitting…

A – Joe is a snare, a very verby snare, the kick would be Neil, Transforma would be the kick, Prfct Mandem would be two  my toms, and the other tom would be L3mmy Dubz, my glockenspiel would be Something Something. Sovryn is my hi hat, an open hi hat, very open, very important and pretty, and you are the chair behind the kit where I sit on while playing, you are my stool.

I – Well that’s flattering, it’s a very important part of the drum set.

I – To end this I’d like to say thanks to Goat Shed for the opportunity to talk shit with AL/SO so people can see the level of dumbness that we deal with, thanks to Joe Ford for everything, Shrike is the man and thanks to everyone that talked me down because f*ck you!

A – First of all, Joe you have verby snares and there’s nothing you can do about it.